"And G-d spoke to Moshe after the death of Aharon's two sons, who brought an (unauthorized) offering before HaShem and died. And G-d said to Moshe: Speak to your brother Aharon, and let him not enter the holy place that is beyond the partition concealing the ark at any time, so that he may not die, since I appear over the ark cover in a cloud."

"Only thusly shall Aharon enter into the holy place: with a young bullock for a sin offering, and a ram for a burnt offering. He shall put on the sanctified white linen tunic, and have linen pants on his flesh. He shall gird himself with a linen sash, and bind his head with a linen turban. These are sacred vestments; before putting them on, he must immerse himself. And he shall take from the congregation of the children of Israel two goats for a sin offering, and one ram for a burnt offering. And Aharon shall offer the bullock of the sin offering which is for himself, and he shall make atonement for himself and for his family... " (Leviticus 16) 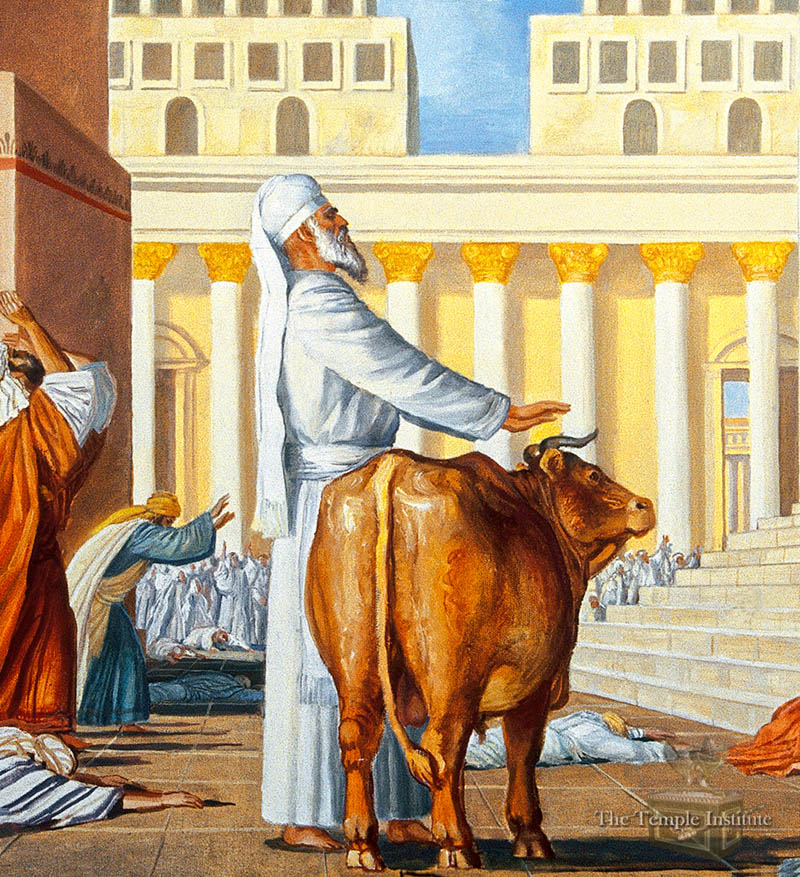 The Kohen Gadol drew near to the animal. Facing the sanctuary, he placed his two hands on the bullock's head, between its horns, and confessed. This was in keeping the directives of the verse (ibid.): "And Aharon shall offer the bullock of the sin offering which is for himself, and he shall make atonement for himself and for his family... " The sages of Israel received a tradition that these words refer to oral confession.

And this was the wording of the Kohen Gadol's confession:

"I beseech You, HaShem;
I have sinned, rebelled, and transgressed against You,
I, and my household;
I beseech You, HaShem,
Grant atonement for the sins,
and for the iniquities and transgressions
which I have committed against You,
I, and my household.
As it is written in the Torah
of Your servant, Moshe:
'For on this day
atonement shall be made for you,
to purify you from all your sins
- before HaShem you shall be purified'." 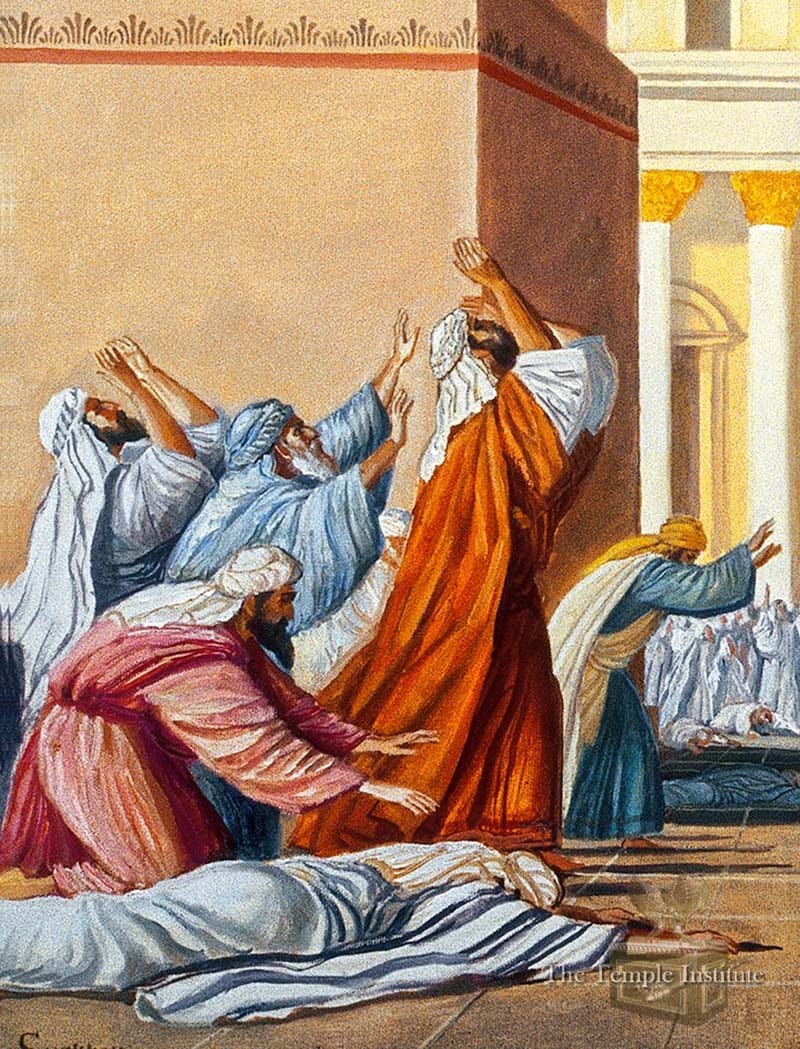 The Ineffable Name of G-d

During these prayers on this awesome day, the Kohen Gadol would utter the Ineffable Name of G-d known as the Tetragrammaton. In Hebrew, this is known as G-d's "proper name" (Shem HaMeforash) and denotes the Holy One as the ultimate source of all existence. This most holy name is ordinarily not pronounced as it is written, and is not used at all outside of the Holy Temple. Even in the Temple it is used infrequently. During the course of the services on the Day of Atonement, the High Priest will have occasion to utter it 10 times.

In this confession, the Kohen Gadol pronounces this name 3 times. When the congregation who are assembled in the court hear the holy name of G-d from the lips of the Kohen Gadol, they collectively respond "Blessed be the Name of His glorious kingdom, for ever and ever," and prostrate themselves on the ground.

Though all of the moving service on the Day of Atonement is fraught with poignancy, tense anticipation and deep personal stirrings of repentance, surely one of the most dramatic moments of the day is the lottery which the Kohen Gadol conducts... for this is the process that will determine the scapegoat, which will be cast off as an atonement for Israel's sins.

After confessing over his bullock, the Kohen Gadol walks to the eastern section of the court, facing the entrance. He is accompanied by two men: at his right, the "assistant," who is actually none other than the replacement kohen who was designated as a stand-in for the Kohen Gadol, should he be rendered unfit. At his left, the head of the family clan who is responsible for the service in the Temple on that day of the week. 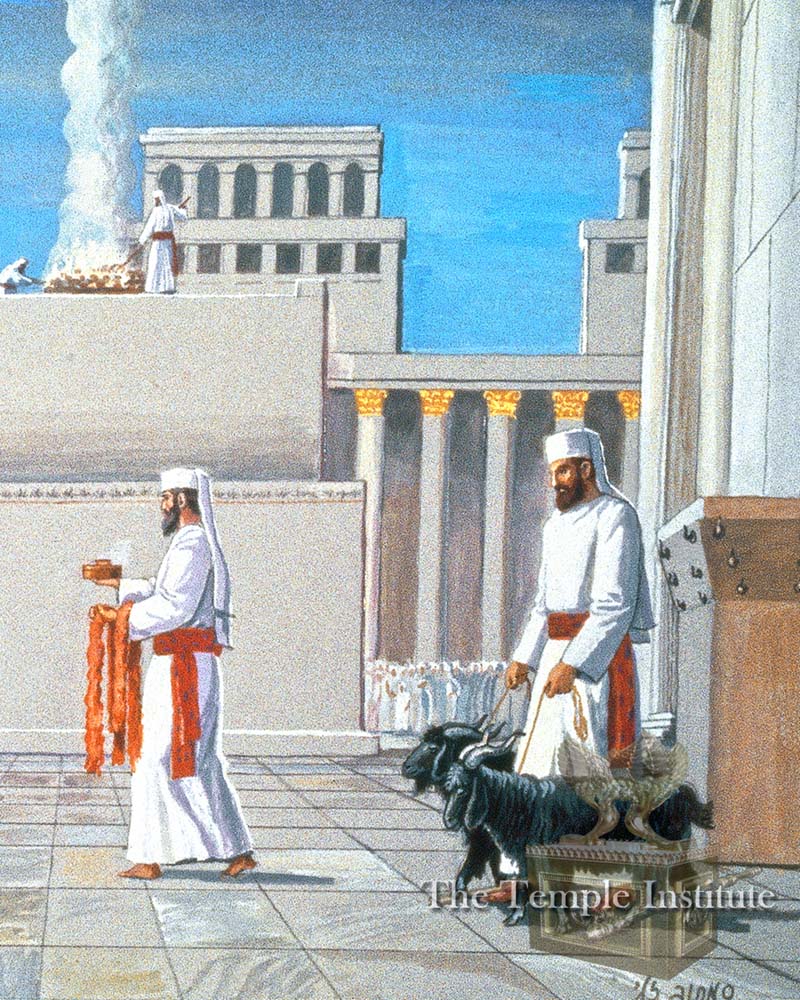 The Two Goats and the Lottery Box

There in the eastern sector of the court, to the north of the altar, stand two goats in preparation for the lottery:

"And he shall take from the congregation of the children of Israel two goats for a sin offering, and one ram for a burnt offering... and he shall take the two goats, and present them before the Lord at the door of the Tent of Meeting. And Aharon shall cast lots upon the two goats; one lot for HaShem, and the other lot for Azazel... " (Lev. 16)

A wooden lottery box was kept there as well, and within it were the two lots, in accordance with the verses above. This box was just large enough to hold the two lots, and for the priest to put both his hands inside. On one lot the two Hebrew words meaning "For HaShem" were written, and the other was inscribed with single word "For Azazel."

Azazel is actually the name of a place; it was to this location that the scapegoat was sent. Azazel was a high, rocky precipice in the Judean desert. The goat was sent off this point to its death.

These lots were originally made of wood. This was probably what we know today as boxwood; some have written that a wood resembling mahogany was used. Later, the lots were prepared from gold by the Kohen Gadol, Yehoshua ben Gamliel, during his term of office. He was praised by the sages for this initiative, which was done to increase the honor of the holy day. 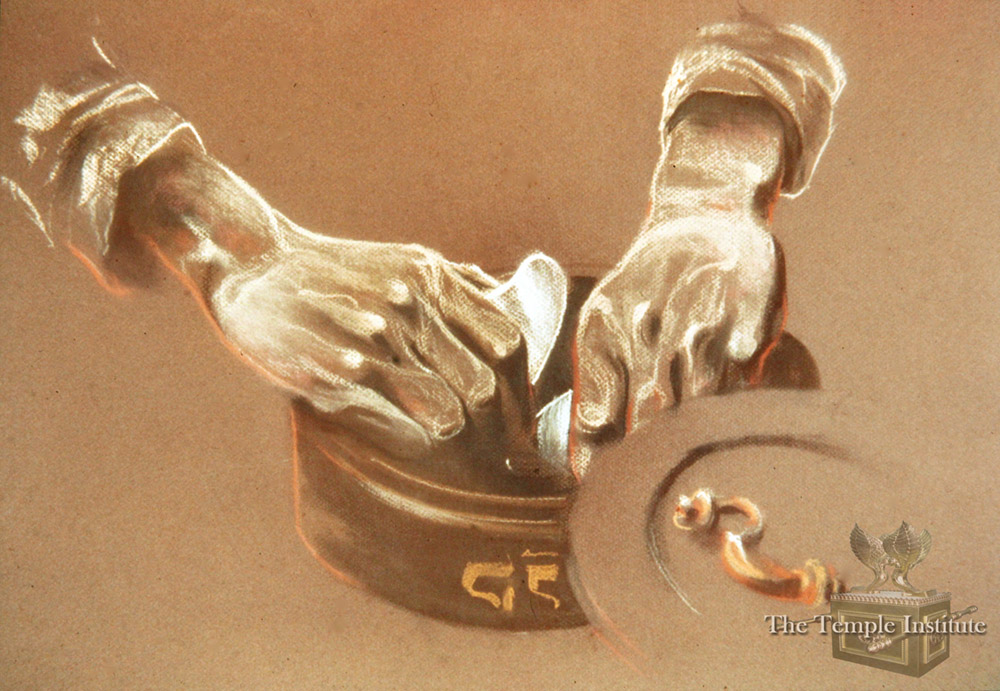 Flanked by the two men on either side of him, the Kohen Gadol thrusts his hands into the lottery box and stirs the two lots within, in order to ascertain that he has no notion of which is inscribed "For HaShem." It was considered an auspicious sign from Heaven if that lot were to drawn by his right hand; thus he mixes the lots about so that he will not recognize them, and thereby raise that lot in his right hand. Tradition does in fact record that for a period of many years, it actually transpired that the Kohen Gadol's right hand did arbitrarily come up holding the lot marked "For HaShem." This phenomena ceased a number of years before the Temple's destruction.

Other opinions maintain that he drew the lots very quickly from their box, demonstrating that he acts without forethought or hesitation as to which lot he is raising.

In this manner, the Kohen Gadol raised up the two lots from the box, one in his right hand and one in his left. Only once he held them up did he learn which hand held each lot:

"Raise Up Your Right Hand!"

If his right hand held the lot of "For HaShem," the assistant would declare "Master! Kohen Gadol! Raise up your right hand!" And hearing this cry, all those assembled would receive the tiding, and know that this favorable sign has indeed transpired.

But if his left hand was seen to contain this lot, the head of the family clan cried out "Master! HKohen Gadol! Raise up your left hand!" And thus the deed would be known.